What will China’s digital yuan mean for Alipay and WeChat Pay?

Alison Tudor-Ackroyd
10-13 minutes
China’s e-payments ecosystem is set to step up a level of sophistication as the coronavirus pandemic and deteriorating US-China relations hasten Beijing’s plans for a digital fiat currency; potentially complicating a landscape dominated by Alipay and WeChat Pay.
The central bank’s e-yuan, called Digital Currency Electronic Payment (DC/EP), would let citizens ­pay for goods with e-wallets, replacing banknotes and coins and ­accelerating the dash by the world’s second-largest economy towards a cashless society.

“The timetable has been sped up by the coronavirus and the realpolitik of  US-China relations,” said former IBM executive Richard Turrin, who is writing a book on China’s digital currency.

China already boasts more electronic mobile payments than anywhere else, with 711 million monthly active users on Ant Group’s Alipay and about 800 million on Tencent Holdings’ ­WeChat Pay service in a US$49 trillion market, almost 500 times bigger than in the United States. Yi Gang, the People’s Bank of China governor,

wants to hasten the digital transformation of the country’s currency and economy, taking his cue from how the private sector uses real-time data from transactions to guide their growth. Having its own digital currency would allow China to become the world’s first major country capable of monitoring economic activity in real-time. 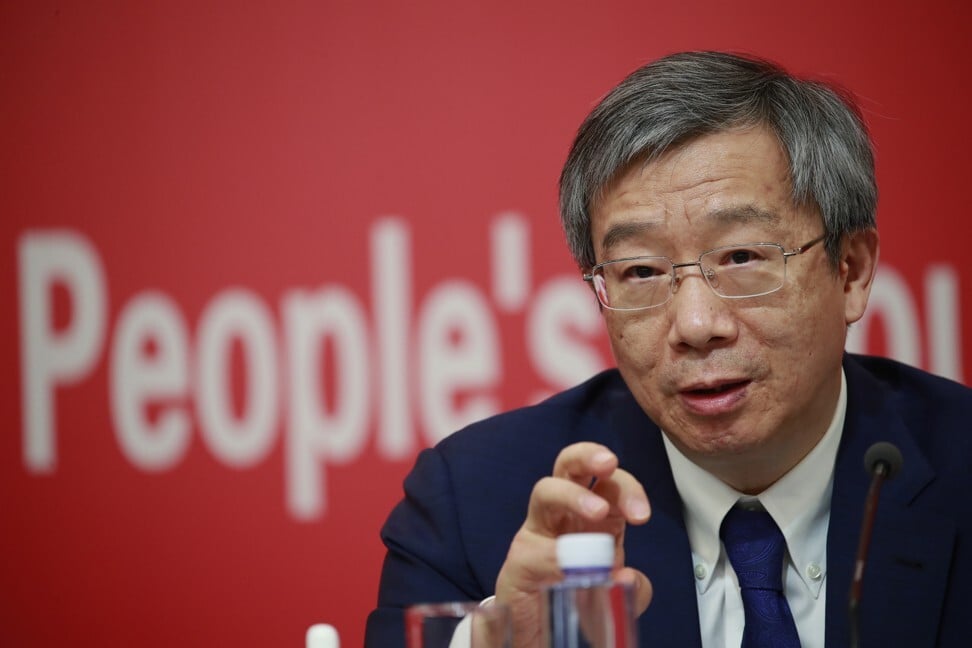 For now, the central bank is keeping the details of its digital currency tightly under wraps, and the PBOC did not respond to faxed questions sent more than a week ago to its Beijing office.

The PBOC’s preparations come as Ant Group, an affiliate of this newspaper’s owner Alibaba Group Holding, plans to raise about US$30 billion in Hong Kong and Shanghai, in what could become the largest initial public offering in history.

Analysts and investors are busy assessing how Ant Group’s Alipay as well as its rival WeChat Pay, will coexist with the central bank’s digital yuan. 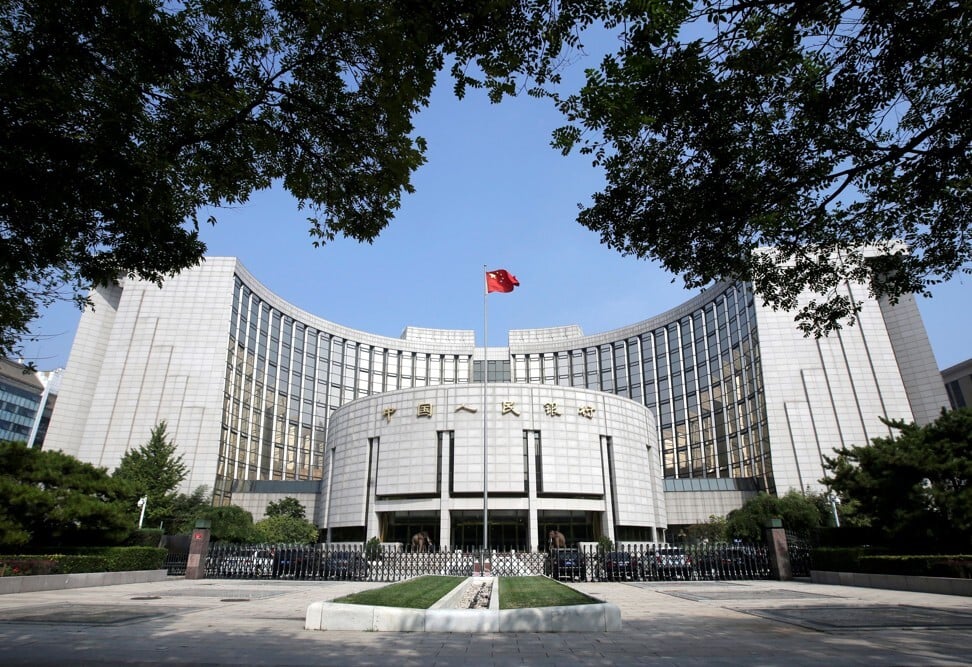 “We do not have sufficient visibility as to the impact of the DC/EP on consumers’ payment behaviour and the payment industry,” Ant said in its. “It is not clear how the DC/EP will fit into or change the current digital payment industry landscape.”

Many analysts are sanguine about the likely impact of the DC/EP on Alipay and WeChat Pay, even if the digital currency’s imminent debut looks like the run-up to an epic showdown.

The digital yuan and the existing systems are not mutually exclusive. Most consumers are likely to continue using their Alipay or WeChat Pay platforms – or both systems, in many cases – for their multitude of applications and services that have evolved from simple payments to loans, asset management and money-market investments.

The usage data of hundreds of millions of users are already giving Ant and Tencent valuable insights into consumer behaviour, which give the companies further advantage over rivals’ attempts to catch up, analysts said. 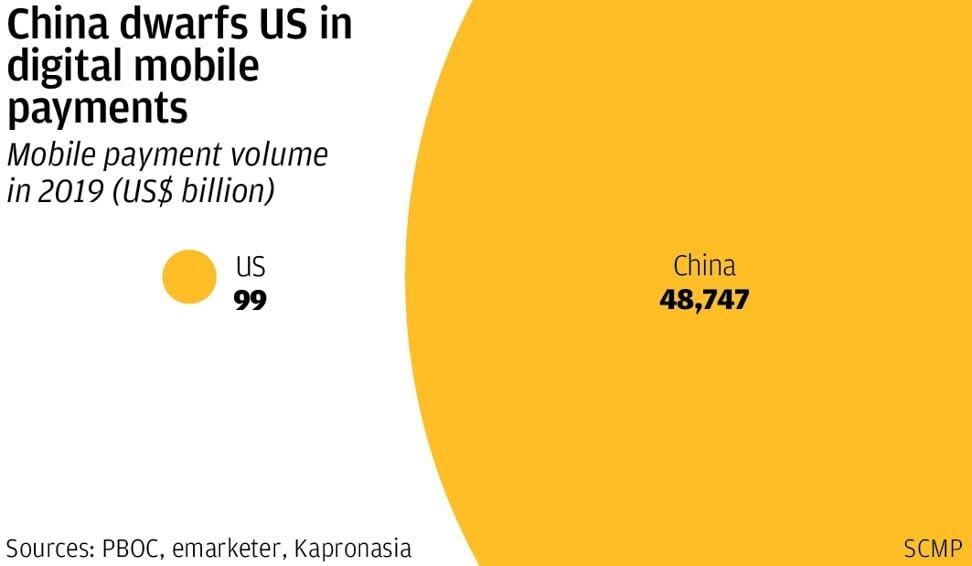 Analysts also point out that Beijing is working with financial institutions rather than supplanting them to maintain financial stability and reach its goals faster. The central bank’s top priorities are fine-tuning monetary policy, weeding out tax evaders as well as enhancing financial inclusion.

“We expect an immaterial impact of the digital currency on the core business of the internet companies in the near-term, as the design is still at an early stage with many uncertainties in technologies and regulation,” said Bank of America equity analyst Sachin Salgaonkar in a June 11 report.

The evolving structure of the DC/EP, comments by China’s central bank officials, patents filed by Alipay, as well as the payments giants’ participation in the central bank’s project, back up their analysis.

The DCEP puts China at the forefront of ­developing a retail central bank digital currency (CBDC) globally at scale. Policymakers and businesspeople around the world are keen to see how it will interact with private enterprise as they move forward with their own ­digital currencies.

“China is positioning itself as a trailblazer when it comes to the future of money,” said Henri Arslanian, who runs PwC’s cryptocurrency business globally and advises central banks on digital currencies. 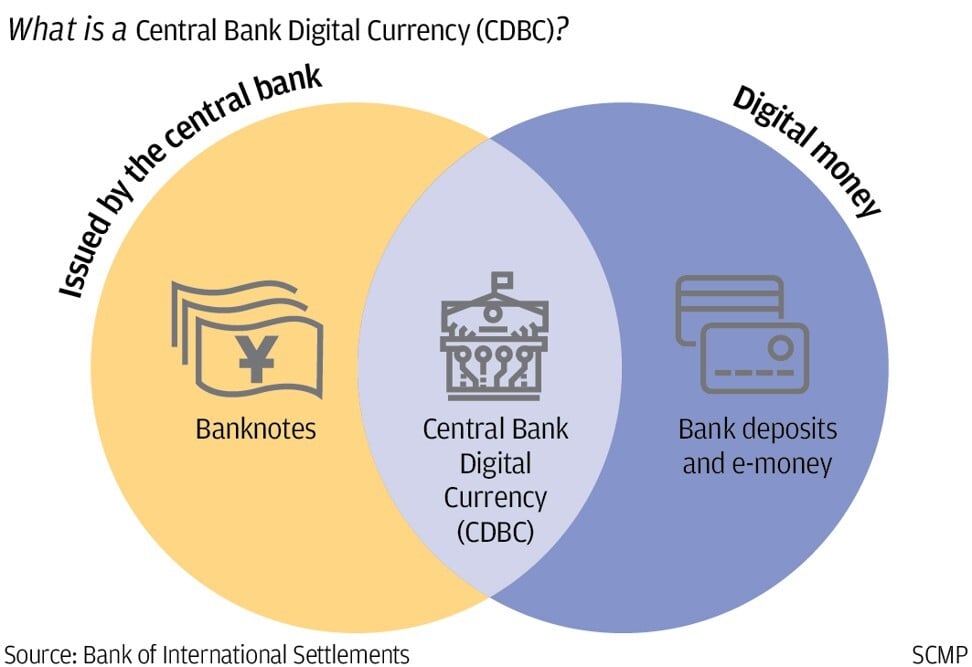 For all of the PBOC’s recent flurry of activity, a launch date is still some way off. The central bank has been studying digital currencies since 2014. Its former governor Zhou Xiaochuan said in March 2018 that it might take another decade before the central bank launched one of its own, although that now seems a conservative estimate.

that timetable, as has the coronavirus pandemic.

that China would keep testing the digital currency until at least the 2022 Winter Olympics in Beijing.

“Being one of the newest of its kind, we believe it will take years before an official launch of the DC/EP system in China,” said Mizuho Securities analyst Ben Huang in a June 1 report.

Launching a digital currency is complex, particularly for a large economy, and as former central banker Zhou noted in March 2018, if there is a technical fault, consumers could lose money. 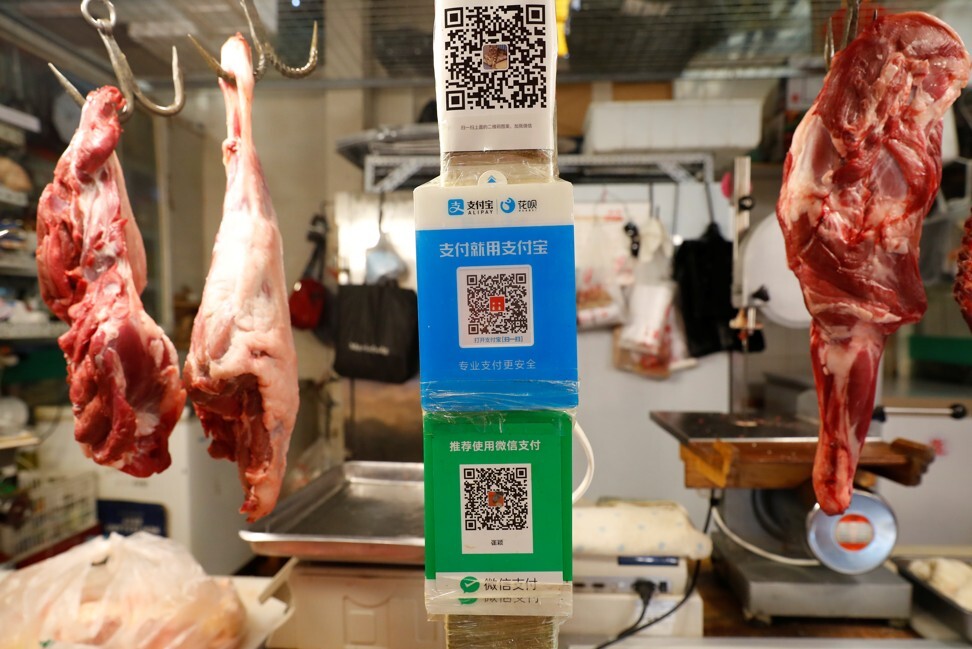 QR codes of the digital payment services WeChat Pay and Alipay seen at a meat stall at a fresh market in Beijing on August 8. Photo: Reuters

China’s digital currency will have two tiers, comprising the first level distributed by the central bank to commercial banks, and a second layer used by retail customers. The first-level design of the CBDC has been “basically completed” along with the formulation of technical standards and interoperability tests, Yi

in May during the country’s legislative meetings,

The e-yuan will next be distributed to payment service providers and other private sector institutions, the central bank said in a July report published by the International Monetary Fund.

The retail leg of China’s digital currency is ready as most Chinese are familiar with using e-wallets. The hard part is future-proofing the back-end of the system, the part that roots out money-laundering and which uses big data to fine-tune monetary policy, said analysts.

“Alipay and WeChat Pay are the first generation of digital payment in China, and the CBDC will be the second generation,” said Turrin. “Now they have to develop a new digital system; and it will not simply be a mirror of the existing fiat system, it has to be ready for a new generation of digital cash usage.” 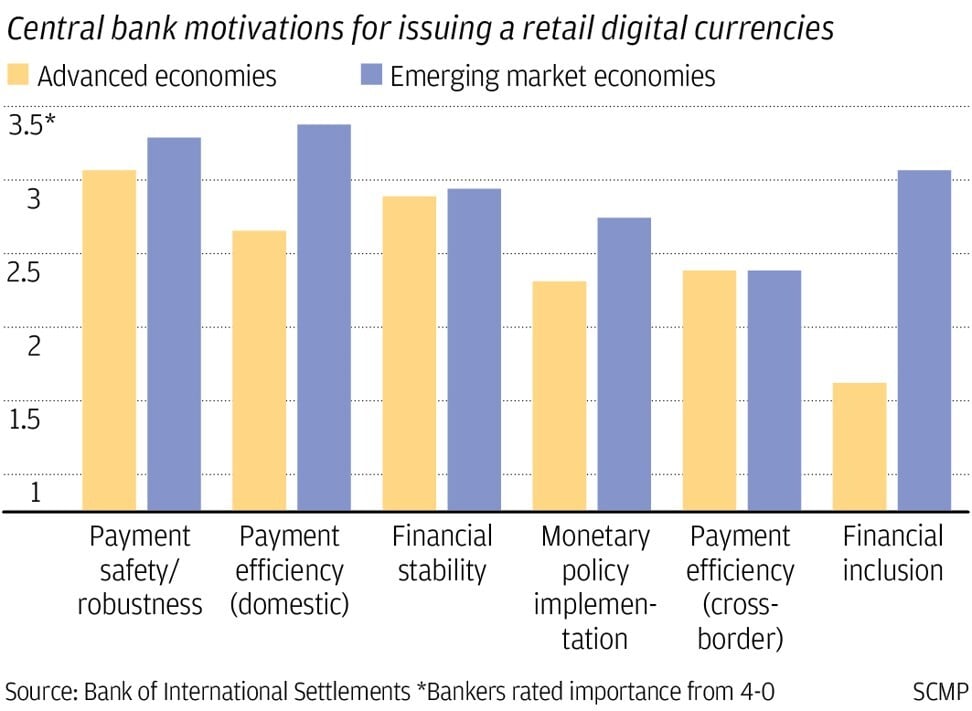 The Chinese central bank established a fintech laboratory in July with little fanfare. Taking its name from the central bank’s street address in the Chinese capital, Chengfang Financial Technology is armed with 2 billion yuan in capital for software development and research into data processing.

The PBOC is also treading carefully as its CBDC could cause the bank run of all bank runs, if not set up correctly. Logically, people would drain their accounts to put money in a risk-free e-wallet backed by the government, especially in an era of relatively low-interest rates.

A CBDC could also wreak havoc on banks’ profitability. Banks make money out of holding money, so if citizens prefer to hold money in an e-wallet instead of a bank account that means less money for the banks to lend.

To avoid such upsets, the PBOC told the IMF that it is likely to limit e-yuan to small, retail transactions by setting maximum daily and yearly limits on payments and that it will only process large amounts by appointment. The PBOC said it may apply fees for large-sum or high-frequency transactions. It will also offer no interest on accounts.

The PBOC has been testing the CBDC with companies since

. It held trials in April across four cities: Shenzhen, Xiong’an, Chengdu and Suzhou. During this pilot, state-owned Agricultural Bank of China launched an

Bank of China, and the Industrial and Commercial Bank of China were also reported to be testing the digital yuan last month, part of an

by the Ministry of Commerce to stimulate the service sector. China Construction Bank briefly rolled out a wallet supporting digital yuan last Saturday.

“It is not the purpose of the PBOC to compete with commercial banks or third-party payment companies for users’ assets and business opportunities,” said Mizuho’s Huang.

Ant and Tencent are also helping the government on the project, a sign that they do not think that the CBDC will kill off their own apps. Ant confirmed its participation in the project within its IPO prospectus, while a Tencent spokeswoman declined to comment.

has filed at least

in preparation for how

facilitate a CBDC. People will be able to spend the tokens on WeChat Pay and Alipay, said

“We expect the leading payment companies like Tencent and Ant to be part of the research and design process led by the authorities, contributing technical and operating experience and know-how,” said Salgaonkar.

The Bank of International Settlements said CBDCs can coexist within a two-tiered payment system, allowing central banks to focus on ensuring trust, stability and integrity in payments while the private sector is best placed to undertake the consumer-facing activity of CBDCs. 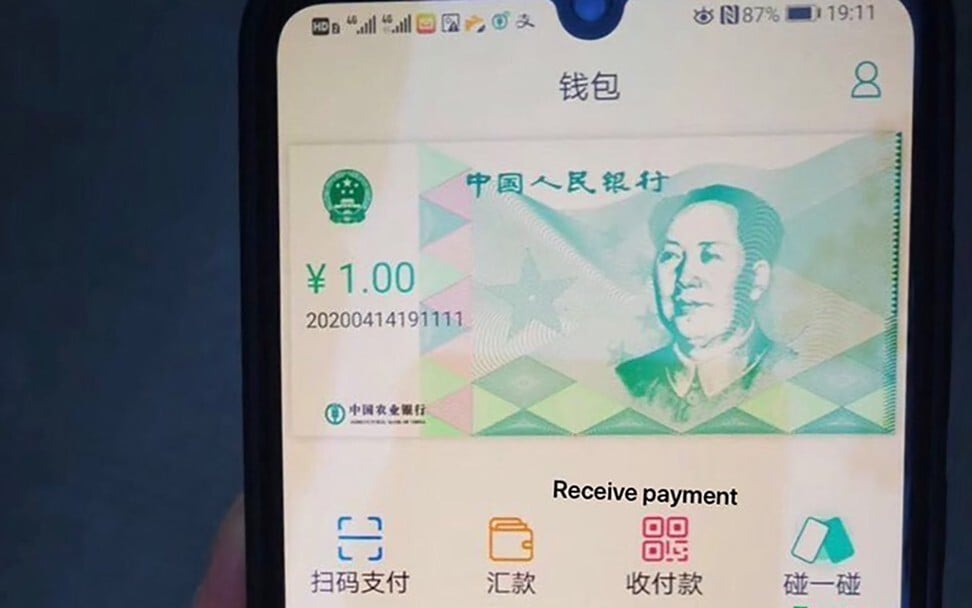 To be sure, the ubiquity of WeChat Pay and Alipay has caused the PBOC some concern. Controlling 96 per cent of all e-money transactions inside China, payment providers have become “systemically significant” and a contingency system is needed in the event of a failure in the architecture of Alipay or WeChat Pay,

on Wednesday that companies straddling at least two financial sectors must apply for licenses, boosting regulatory oversight of a swathe of companies including Alipay and WeChat Pay and cementing a proposal made by the PBOC last year. Ant said in its prospectus that a unit housing its financial businesses would apply for the licenses.

Still, Mu sees the CBDC and the payment systems as ultimately complementary. “In the future, I can only see synergy, not competition with them,” he said.

The central bank’s digital yuan will have an advantage over other e-wallets in its legal status as the fiat currency system, which is handy in remittances. Also, Alipay and WeChat Pay are not interoperable, requiring an intermediary bank to facilitate transfers between the two systems. The central bank’s digital yuan would be free of such constraint, and will be compatible with both.

instead of NFC, as the Mondrian-like square bars are less expensive for merchants to support.

In terms of anonymity, the systems are fairly equal, said analysts. “A large majority of Chinese online consumers are likely to be indifferent to using RMB or a new digital currency for online payment, as anonymity is not provided to them in the current online payment scenarios,” said Bank of America’s Salgaonkar. 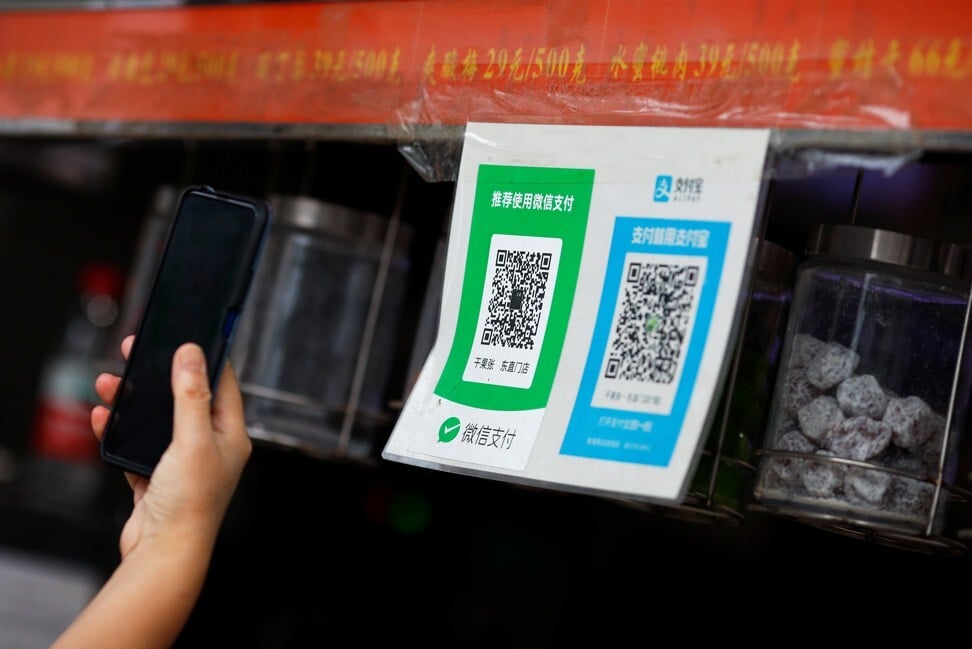 QR codes of the digital payment services WeChat Pay and Alipay are seen at a shop in Beijing, on August 6, 2020. Photo: Reuters

Finally, there is the “stickiness” of Ant and WeChat’s platforms which will ensure they endure despite some of the relative safety and technical advantages of a fiat currency. People use them for multiple tasks, from stock trading to planning for retirement as well as booking cinema tickets and paying for lunch. The smorgasbord of services is only becoming wider after Alipay

to third-party providers earlier this year.

“People don’t turn to bank apps for entertainment on a Saturday night, but they do turn to Alipay and WeChat,” said Turrin.