COVID-19 is catching Neobanks in the middle of a coronavirus induced “flight to quality.” Investors are moving capital away from risk and toward the safety of larger incumbents.  Preliminary figures from the Federal reserve show large cash movements into the larger incumbent banks, perhaps based on the belief that they are “too big to fail” and provide a haven for cash.

Neobanks are trying to gain deposits and user trust in what is now a very different market than when they launched, and their response to these changes in upcoming months will be critical.  For the record, I like neobanks and think that they have had a profoundly positive influence in making banking services better for everyone.

That said, their position as newcomers, heavy dependence on investor support, high valuations, and lack of profits puts some in the same category as WeWork.  A cautionary comparison and perhaps an overstatement, but amid a financial crisis apropos.  It’s now harder to see how ease of use will attract investors who are suddenly more worried about trust and safety.

Let’s look at how neobanks are going to do in three critical areas, deposits, investors, and interest rates.

The “flight to quality” is already hitting neobanks according to statistics just out from the Federal Reserve and is providing the first hints that the world has changed rather suddenly for neobanks. 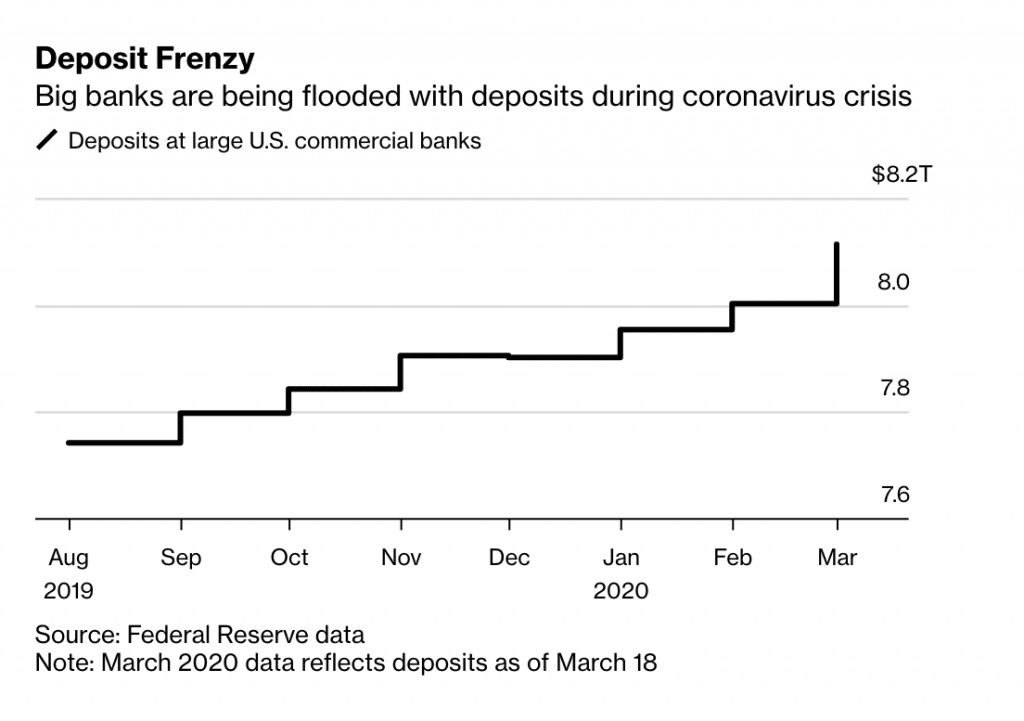 Drilling more deeply into the Fed data, shows why this is critical for neobanks.  The chart below shows the weekly percentage gain in new deposits from 26 February through 18 March between large and small commercial banks.  Large banks showed a monthly gain of 5.6% in deposit increases compared to 1.7% for small banks.  More money poured into large banks than small.

For perspective this represents a remarkable 6-fold increase in deposits for large commercial banks, compared to the prior year.  Of critical importance for neobanks is that investor’s preference for large banks more than doubled compared with last year.  This should be terrifying for neobanks. 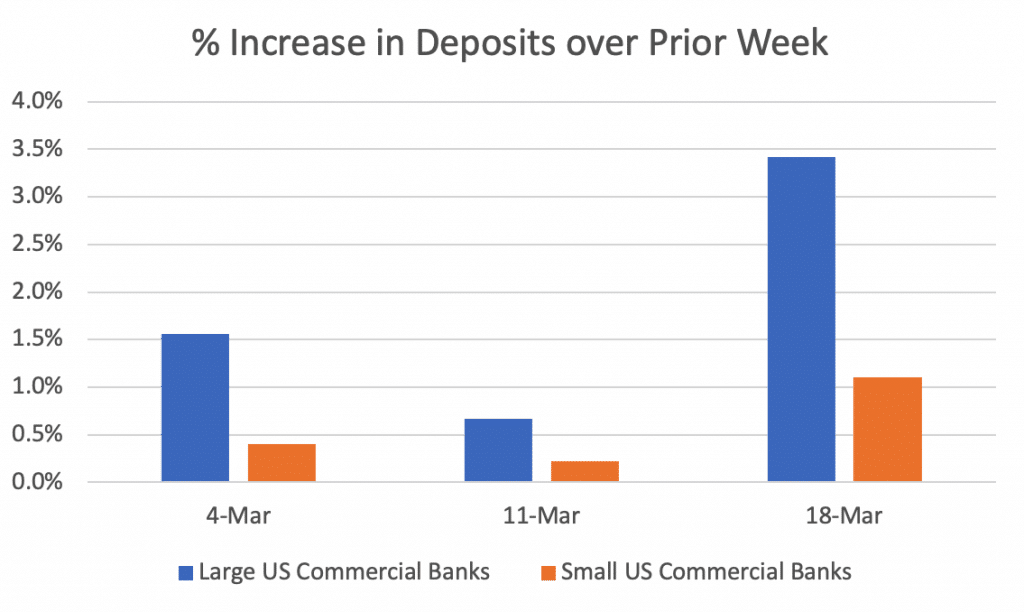 The comparison between large and small U.S. commercial banks may not be an exact match for neobanks, who would be lumped in with the small bank data, but it is signaling that size matters.  Many of the smaller banks lumped in this analysis have been around quite a while, and if it’s that hard for them to attract deposits away from the top 25 banks, it will be even harder for neobanks.

Clearly, this data is signaling that neobanks are going to have to fight even harder for deposits given a protracted period of economic turbulence.  The problem is that they have limited tools to compete.  The first is to offer higher interest on accounts, which we will see is becoming more expensive.  The second is to provide other unknown new services, which cost time and money to develop.  Additional expenses of any kind combined with reduced deposits will stress their business models and force them to go back to investors for more money.  Investors may no longer have the funds to support them, or offer it at rates that severely challenge their operations. 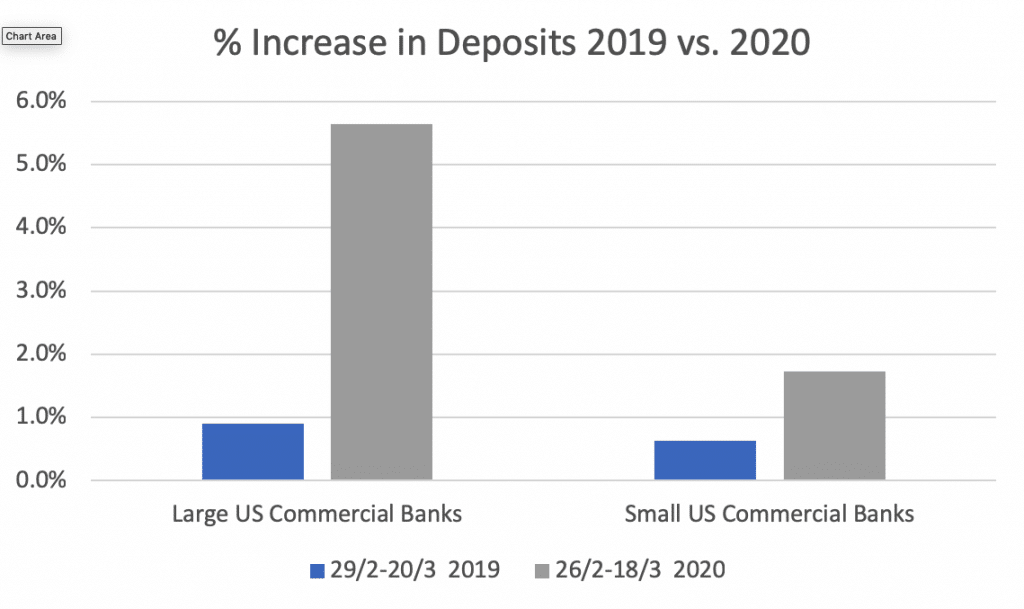 Cricial to neobanks, is that the ratio of deposits in favour of large banks more than doubled.

N26 cofounder Maximillian Tayenthal, one of the first neobank execs to speak of the crisis, told Bloomberg that “Our customers’ card sales in March have so far declined. In certain markets we’re seeing a 10% drop in account openings.” So it begins. N26 and Neobanks not only need openings but real deposits, and if the “flight to quality” is as severe in N26’s primary markets as it is in the U.S., a drop in account openings is only part of the story.

The VC industry might actually be facing a disaster. Corporate venture capital activity is shown in the graph below and is far behind last year. Whether this trend continues and rises to the level of “disaster” remains to be seen, but it will undoubtedly impact neobanks dependent on funding to survive. 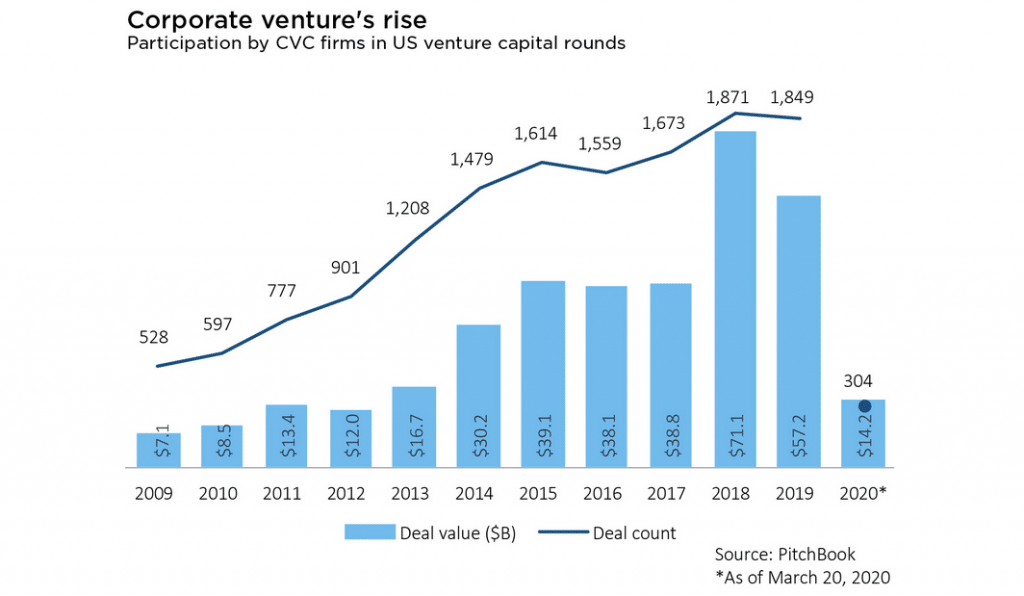 V.C. activity is far behind last year’s in count and volume

Neobanks have been either blessed or cursed, with a tremendous amount of easy money from deep-pocketed V.C. investors. Their business models require regular investment to acquire clients and scale as they operate at a loss. The party is over, and if SoftBank is any indicator, the market for both fundraising and investment is now clearly limited.  Softbank’s second fund failed to meet its fundraising target, and it is now forced to sell down its investments rather than invest.  While Softbank certainly doesn’t represent the industry, it’s difficulties are a signal of changing times.

On the bright side, both “One,” a new neobank specializing in the middle class, and NorthOne, specializing in SME business, were both able to raise Series A funding in March.  Whether their raises were up to expectations is impossible to know.

One observation is that Revolut’s $500 million raise in February was beautifully timed to take advantage of a market peak.  Still, its valuation at a massive $5.5 billion may be hard to support in this new environment.  That it has a war chest is good, when it does fund again, and it will need to given its cash burn, its valuation will take a hit, and investors will look for profits.  The search for profitability will be a trend that will hit all neobanks seeking funding this year.

Neobanks are, for the most part, not profitable and depend on investors to prop up their operations as they buy clients from the marketplace.  One way they do this is by offering increased interest rates. 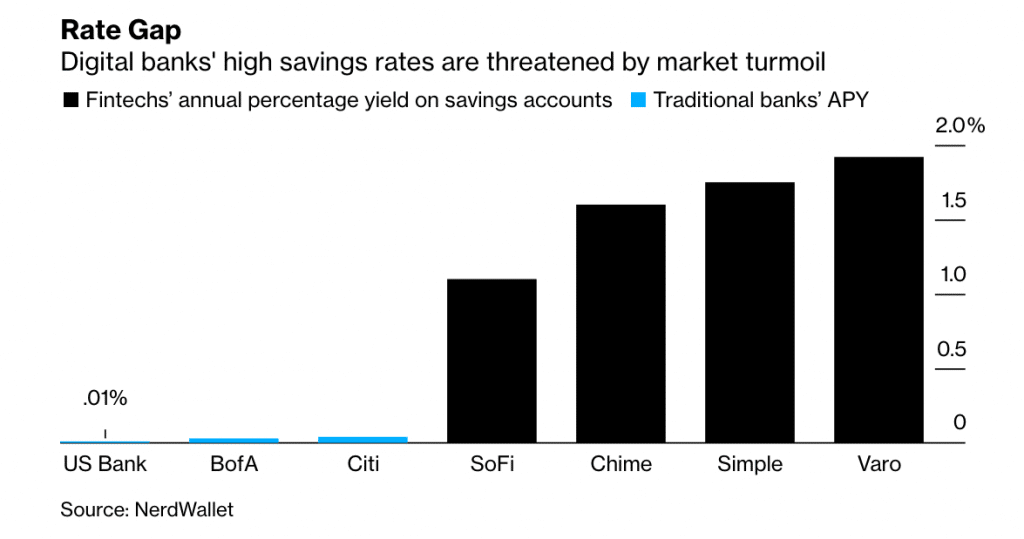 On the 3rd of March, the entire U.S. yield curve slipped below 1% as of Friday the 13th only the 30-year yields above 1%. Meanwhile, top neobanks are paying out 1.7% in interest. There is no rebound in sight as markets are looking for more rate cuts to come. So in rough numbers, if Neos are buying the short end of the curve 1-5 years, they’re earning .42%, paying 1.7%, and losing 1.28% on every customer’s account.

How much longer can they afford to buy clients with high yield savings?  Compared to their expenses in advertising, one of their more significant expenses, it probably won’t break the bank.  That said, if they are forced to lower their interest rates, will they still maintain the ability to attract customers?  That is an unknown, but it will add to their losses at a time when their revenue from interchange fees is declining.

Note that I haven’t said much about the drop in Neobank’s credit card interchange fees, one of their larger sources of revenue.  While their revenue from interchange fees will undoubtedly take a hit by people staying home, I think this loss will be on the scale of 3-4 months and rebound relatively quickly.  The other issues are systemic, longer-term and more pernicious.

No disaster for neobanks

I am not predicting disaster for neobanks. If ever there were nimble competitors able to stop and turn on a dime to meet a market challenge, it would be neobanks.  In addition, the market for 100% digital non-branch based banking is exploding as a result of COVID-19.  This trend won’t end any time soon, and neobanks are perfectly positioned to capitalize on it.

The problem is that incumbents learned from neobanks in the past years and bettered their digital offerings to the point that the digital convenience gap they enjoyed is closing.  That doesn’t mean that clients actually -like- incumbent banks, they don’t and find no joy doing business with them (see references), but in times of market volatility, they want size and the perception of security it brings.  Neobanks can’t possibly fight this, and it will severely hamper their ability to draw clients away from incumbents and potentially force them to scale back their world-conquering ambitions.

Make no mistake about it, neobanks -must- draw clients and deposits away from incumbents in order to survive.  While new young first-time account openers are certainly great clients, neobanks do not have the luxury of time to wait for these clients and their accounts to mature; they must steal business to meet what will soon be increasing investor demands for profit.

The market has changed radically for neobank services in just a few short months, and if the flow of capital into new accounts from clients slows and investors balk at the high valuations, we can look for a shakeout in the industry.  I don’t think it will hit the major players, but the large number of “me too” players that lack clear product differentiation make some form of consolidation a given.

There seem to be three exit strategies for neobanks challenged by what appears to be a prolonged downturn.  The first is the sale to an incumbent bank, a variation on the recent trend for incumbents to buy fintechs.  Neobanks will be in the awkward position of trying to find an incumbent that “needs” the I.P. of the neobank, to modernize their tech or appeal to millennials somehow.  While undoubtedly possible, only a few neobanks have the I.P. to pull this off.

The second exit strategy is consolidation with another neobank.  This, to my knowledge, hasn’t been done yet on any scale.  Neobank investors will get a low-return exit that will cost them dearly.  Neobank accounts with small deposits and even lower loyalty to the neobank will not sell at a premium.  The third option is the most damaging but has already been done, close.  N26 did this in the U.K. market last year.  Presumably, they found that their clients had no saleable value, and with only a digital presence, closing was as easy as turning off the servers.”

“The dance of death; the careless and the careful.”​  Coloured aquatint by T. Rowlandson, 1816.  The similarity to our current dance with neobank investment cannot be understated.