Pulling Back the Curtain on Innovation Theater

The digital revolution continues, and we are bombarded daily with the breathtaking innovations made by large companies in their adoption of digitization. Or so it seems. Within the innovation community much has been made about “innovation theater,” which could be defined as making a show of innovating, while being less impressive in its actual adoption. I recently wrote a well-received article on why Innovation Labs are Failing that outlines some of the symptoms of this problem, and why, for a multitude of reasons, some labs may be more stage sets than genuine agents of change.

Keeping the perception of innovation alive is critical for CEOs because it has a significant impact on future revenue. This is particularly true in areas like financial services, which are in a state of perpetual disruption with the entry of new digital players. Innovation theater matters because it promotes the impression of innovation and the future value that it brings, improvements that may not actually exist to the degree advertised.

“Innovation distinguishes between a leader and a follower.”
Steve Jobs

It’s understandably difficult to demonstrate that “innovation theater” exists, aside from word-of-mouth accounts from within the afflicted organizations. Moreover, there is no reliable way to determine the veracity of these accounts, which in some cases may be the natural venting of frustration by thwarted or otherwise aggrieved innovators.

A recent report from CBInsights on JP Morgan, and how banks stack up on Fintech and Innovation, does give us a peek and perhaps even some quantifiable data on “innovation theater”. The research analyzed the number of times “tech,” “technology,” and “digital,” were referenced in earnings calls during the period 2009-2017 for a number of large (bulge bracket) banks. Earnings calls are important: they are management’s primary means of updating shareholders on the company’s progress, assuring them of the soundness of their investment and allowing for “future-looking statements” that reinforce the message of progress.

The results below show Bank of America and Barclays as clear leaders in this regard, using these terms with the greatest frequency. The natural assumption would be that these institutions are leaders in digitization, and, as a corollary, are heavily investing in the future of digital banking as a means of both self preservation and guaranteeing shareholders’ interests. 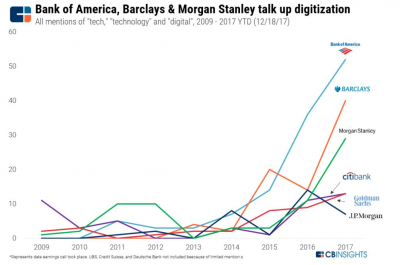 However, the frequency of usage may not be a reliable index. The CBInsights analysts go on to examine the total investments made in “fintech M&A.” This figure is not a surrogate for overall corporate investment in digitization, but it certainly reflects corporate intent within the digital new frontier.   Interestingly, the two “winners” in the digital key-word tally rank low on the scale of actual fintech investment.   This is a surprising result given the relative emphasis on these terms in investor calls. 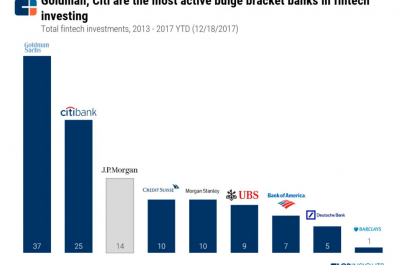 The point elegantly made by the CBInsights report is that actual investment in digital and tech does not correlate to the signposting of it.  This does not mean that innovation isn’t happening at these institutions. It clearly is, and what’s more, the internal investments in digital mentioned in the report are significant.   It does however, raise the age-old question of whether “talking the talk” is a reliable correlate of “walking the walk.”

More to the point, is this disconnect quantitative proof of “innovation theater?”  To be certain, I would need to know the context in which each of these terms was used during the earnings calls, and map it to a more exacting analysis of overall digital spending.  Unfortunately I don’t have the data, but do believe that what we’ve got may be as close as we can get to quantifying the “innovation theater” phenomena.